Home page > Blog > Where does this bitterness come from? The role of alpha acids and beta acids contained in hops

Where does this bitterness come from? The role of alpha acids and beta acids contained in hops

Breweries around the world have been using hops for hundreds of years to produce beer, because its bactericidal properties, which help to protect the finished beer from infections, were known and valued. More or less at the beginning of the 20th century, its other properties began to be appreciated, which strongly influenced the number of hop varieties available on the market. Since then, it has increased several times! One of them was the acid content of the hop resin, i.e. the acids responsible for the bitterness in the finished beer.

Each hop package contains information about the alpha-acid content of the hop resin, which is usually 5% - 20% of the dry weight of hop cones. For the brewer, this is invaluable knowledge that will allow him to determine how long and how much hops he should cook to achieve the desired IBU value (International Bitterness Units), i.e. a measure adopted all over the world that determines the bitterness of beer.

The amount of alpha-acids is defined as a percentage of the total basis weight of hops. This means that if 100 grams of Citra hops contain 15% alpha-acids, then the extracted alpha-acids weigh 15 grams.

Alpha-acids are otherwise known as humulones, and these occur in the hop cone in three forms - as humulon, cohumulone and adhumulone. However, the most important is the amount of humulone and cohumulone, while the latter should be as low as possible.

The amount of cohumulone in hops is defined as a percentage of the total amount of alpha-acids. In the finished beer, bitterness is influenced by both humulon and cohumulone, but the latter's influence is rather unfavorable, because its taste is described as "sticky" and more spicy. This means that beer with the same IBU value, but brewed using hops with more cohumulone, may taste more bitter - that's why when creating new varieties, it is important to keep it as low as possible.

It should be noted, however, that alpha-acids do not dissolve in water until they undergo the isomerization process.

Simply put, isomerization is the cooking of hops at high temperatures, during which alpha-acids change their molecular configuration, but do not change the chemical formula itself. 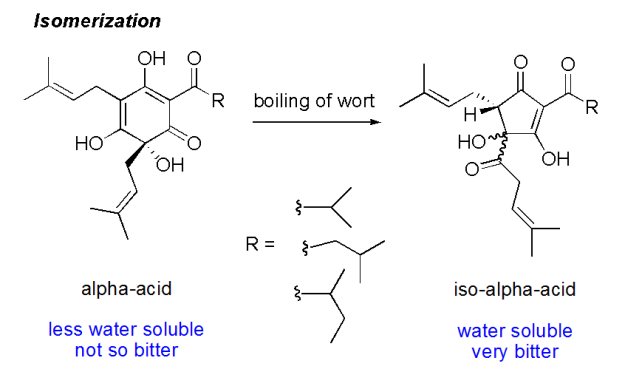 When hops are boiled, alpha-acids are transformed into iso-alpha-acids. As a result, they are more soluble in water and much more bitter (the bitterness of iso-alpha-acids is even 4 times more palpable than the bitterness of alpha-acids). It is worth adding that longer cooking allows us to isomerize more alpha-acids, which makes our wort, and finally the beer, more bitter. To obtain bitterness, it is recommended to boil the hops for 45 to 90 minutes. This time is usually averaged up to 60 minutes. After one hour of boiling the hops, 25% - 30% of alpha-acids are isomerized. Longer cooking will allow us to isomerize a little more (from 5% to 10%), but our beer will be deprived of many valuable hop aromas, because they will simply evaporate. That is why the hops, the aroma of which we want to emphasize in the beer, are added at a later stage of the wort cooking and boiled on average for 5 to 15 minutes. 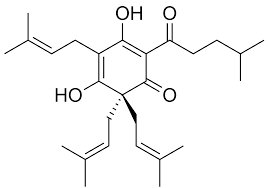 Other acids that are also found in the hops are beta-acids called lupulones, and similarly - like alpha-acids - they consist of: lupulones, colupulones and adlupulones. However, these do not undergo isomerization during cooking. The bitter properties of beta-acids are due to the oxidation of hops, which makes them more soluble in water and more bitter. However, it is worth remembering that oxidized beta-acids are not as bitter as iso-alpha-acids.

At this point, it should also be noted that cold hopping (i.e. adding hops to beer lying in the tank) can also increase the bitterness in our beer, due to beta-acid oxidation.

Alpha acids have the main influence on the bitterness in our beer. However, when choosing hops, it is worth paying attention to the amount of cohumulone, the lower value of which serves our beer better.

Giving bitterness with beta-acids appears somewhat by the way - during cold hopping for a distinctive hop aroma.